Is it an overused trope?

Violence is a thematic tool, not a gameplay mechanic.

Earlier this month, Chris Plante at Polygon opined the notion that Bioshock Infinite’s violence limited its potential audience. Plante submitted the case of his wife, who was enthralled by the game’s opening 15 minutes before the first murder played out in a gratuitous, gory fashion. 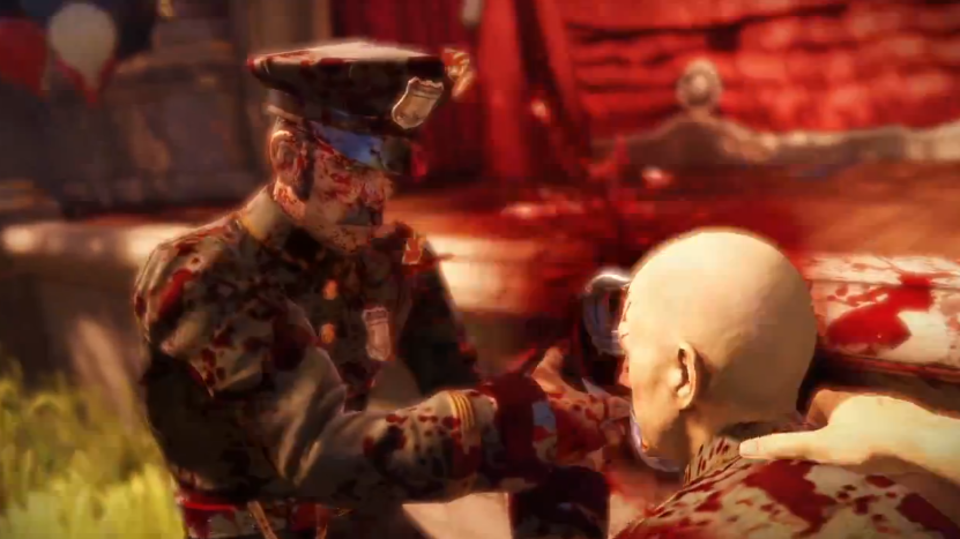 Violence is a pervasive trope featured in video games, but where did it all come from? The history of violence in video games does not simply track the point where visuals were capable of portraying it in a realistic enough manner. Rather, violence is tied to what a player actually does in a game: put simply, Mario’s choice of dispatching Goombas and Koopa Troopers in Super Mario Bros is inherently an act of violence, even if the presentation and act itself are far removed from the initial point of violence in Infinite.

A brief look into the history of video games demonstrates that forms of violence are fairly common-place in a large variety of titles. Barring the majority of sports and puzzle titles, some form of violent act tends to be the simplest method of defeating a form of opponent to garner a sense of achievement, which is an important tenant of why we play video games.

Games have reached the point they have today out of a desire to discover different ways of presenting the defeat of the opponent. Yet, the more graphic depictions of it have become widespread as technological prowess has increased to accommodate it, and the apparent consumer desire for it permeates sales statistics.

It’s difficult to pinpoint a concrete reason as to why this desire exists. Is a visceral defeat of an opponent more satisfying than a placid one? Is the inherent fantasy displayed onscreen so far removed from a players reality that it’s more engaging and entertaining?

This is the real issue with violence in games: the justification. Violence should be a thematic tool, not something glorified in screenshots and marketing material, and it’s fair to say that very few games utilise the former. Thematically, extreme violence in film works to shock the audience and provide a harsh illustration of the complexity of humanity. It puts the viewer in unimaginable situations: from the opening scenes of Saving Private Ryan to various scenes of racial intolerance in American History X, it seeks to horrify and polarise the audience for reasons of empathy and sorrow, as well as question morality and judgement.

In the case of Bioshock Infinite, where the violence is consistent throughout its average run of 12 hours, there is none of this. While the death of that first policeman provided a perfect contrast against the manufactured utopia of Columbia, it’s still presented in a needlessly obtuse and overly fantastical manner. There is nothing subtle about the presentation at all, and it derails the entire experience going forward: Booker doesn’t question his own actions, and Elizabeth is soon disconcerted with what she sees, despite seeing heads being blown off in a shower of blood and gibs, amongst other things.

From the point of view of the audience, the capacity to shock is dulled by the repetition of violence across the game’s length. Titles such as Mortal Kombat (which provided the image for this article’s banner) and Sniper Elite V2 bluntly use their graphic images for entertainment, none of which have any impact when they’re seen for the umpteenth time. If an audience is eventually blasÃ© about seeing a bullet penetrate the skull and brain of an enemy as constantly seen in Sniper Elite V2, then there is absolutely no justification for what we are seeing. It borders on perverse.

There is no reason why violent acts shouldn’t be included in certain video games. It’s problematic when it’s used for no other reason than to sell it to satisfy a perceived desire for it. Violence, used intelligently and creatively, is a wonderful tool, but it should by no means be the dominant tool.

Why does every game have to be about killing things?

There’s been a lot of discussion in the world of game journalists recently about Bioshock Infinite and the violence contained within. I’ve read so many different opinion pieces on the game, but they all seem to come to a similar conclusion, which is: the inherent mechanics of an FPS game served to subvert the foundations that the rest of the story was trying to build.

Generally, this was because FPS games are inherently violent. They’re about shooting: pointing guns at things and watching their heads explode. Bioshock Infinite’s story explored several themes, but I don’t really remember them all in detail, because I was busy exploding heads.

Early in the game, Elizabeth is shocked that your player character, Booker, killed people so brutally. Later, she is shocked that she herself performs such an act. While playing the game, the gory melee executions sometimes cause her to cry out in shock at the horror of it. In short, the game establishes that killing is bad.

However, the rest of the game ignores this. After those few moments of the game informing you that killing is a horrible thing, it sends you wave upon wave of people to kill. You don’t have any choice but to do so. It is essentially contradicting itself.

Now, read what you will from that. It is possible to justify anything, this included. But for me, it boils down to one thing: That’s exactly what most people expect and desire from a AAA game. Hell, Ken Levine himself said a number of times that Bioshock Infinite was all about appealing to the mass market. They created and tweaked the trailers, gameplay, advertising and box art for the purpose of attracting as many people as possible.

That’s certainly a sensible decision from a business point of view. But, as a lover of games of all forms, I see it as a problem for the future of the industry. We already know the complaints that most have about "junk food" games like Call of Duty and friends – they’re made quickly, don’t last long, taste okay while you’re consuming them, but leave you with a bad aftertaste and ultimately feeling unsatisfied. They’re short, shallow, violent, and the biggest change in each one is who and where you happen to be shooting at the time. The selling point of these games is nothing honourable – they’re marketed to people who want nothing more to see your character choke their enemies to death in first person.

But what is Bioshock Infinite except for Call of Duty with a more interesting narrative wrapped around it? In the end, the games boil down to the same thing: trudging through a game world, leaving a pile of dead bodies in your wake. You don’t have any control over what you do and where you go, you are forced to kill people to continue the story and reach the end. It’s not just the FPS genre, either – violence is currently linked to games in an almost complete and unavoidable way.

Even low-gore games and series’ involve a lot of killing, whether it is of people or monsters. For some examples, consider how the enemies are extinguished in Final Fantasy, Mario, Zelda, Starcraft, Civilization, World of Warcraft and so on. Many of these types of games are marketed for children and are generally considered "safe" for all ages. But does a lack of gore make violence in general acceptable? I don’t know the answer to that question.

Even after saying all that, I don’t have much of an issue with games having violence in them. Every other creative media has it – there are violent books, films, comics, even music. The existence of games with violence is not the issue for me. However, the volume of them is.

The problem here is that violence exists in almost every game, is performed by the player, and is encouraged and enforced by the gameplay mechanics. If you looked at all the AAA releases in the west of the last few years (and exclude sports games), I would be surprised if even 1% of them are non-violent. It is a problem that more and more folks are starting to notice with the industry, and movements like Greenlight and Kickstarter are getting lots of attention due to players wanting something different.

There’s one genre that proves that games don’t need to be all about killing things: Adventure. The genre that many claimed was dead (but really isn’t) also happens to be the only genre that isn’t all about making people dead! Most adventure games I’ve played treat death as a horrible thing, and often deal with the emotional effects of death on others – the panic, pain, suspicion, distrust, and everything else that people feel when somebody close to them dies. Look at the Ace Attorney series – these are about what happens after a murder, the legal proceedings, the accusations and trials that changes lives after one person loses theirs. Adventure games tend to explore the impact of death, while almost everything else tends to trivialise it. (Casual, mobile and puzzle games also fit in the category of generally being non-violent, but I’m more talking about the big AAA releases.)

There are exceptions, of course. Think of games like Deus Ex or Dishonored, where you can play through the entire game without killing (almost) anybody – that’s certainly a step in the right direction, even if they tend to reward you for killing, by making the game easier. How about Portal, where the only possible death is the one experienced by the player if you fail? Let’s not forget the recent Batman Arkham games, which are plenty violent, but you don’t kill a single villain due to Batman’s unswerving goal of never killing anybody. Considering the huge success of these games, it goes to show that killing isn’t a requirement for a successful game.

What I’m trying to say is that I wish violence and killing weren’t such widespread elements in games. I wish that games and violence weren’t so strongly connected. Don’t get me wrong, I enjoy plenty of violent games – and I enjoyed Bioshock Infinite quite a lot. What I would like to say, however, is that I am also able to enjoy plenty of games that aren’t violent as well. Surely killing things isn’t the only compelling gameplay mechanic that game designers can think of.